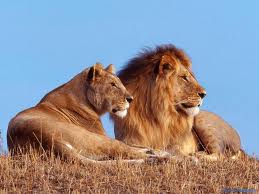 People talk so much about fear these days that is has become a convenient excuse just to sit in the corner and not take action.  Being fearful should not be a fad and it is not cute as my mother would say.  Giving your power away to fear is like a Lion giving up his position in the animal kingdom.  Its normal and human in nature to be afraid of the unknown, but don’t let it dominate you.

Life doesn’t reward quitters, towel throwers or forfeiters.  If a lion doesn’t conquer his fear, he would not be able to hunt the wild game; he would die from hunger all because he was afraid. So how does the lion conquer his fear, he goes after the big game.  Game that is bigger and sometimes faster than him/herself.

We must be like the lion and roar, stop rattling like a snake and roar like a lion or lioness. Lions are very social and live in families called prides, notice the word pride.  They are amongst other fearless lions.  When you observe the lion in nature, you will notice that it is best described by its strength, natural dignity and demand for respect. The lion is born as a powerful creature and power naturally comes to it. (you attract what you are)

Each of us was not born with fear in us, which is something we decided to adopt.  We told ourselves that fear can conquer us, shake, rattle and roll us around.  You must remember your birth right.  You are born powerful, fearfully and wonderfully made, just like the lion.

Get your roar back by doing the following:

No matter what you have been through that may be paralyzing you, no matter what traumatic experience you have encountered now or in the past.  We all are fearful of something, someone or someplace.  But you cannot sit there blessed with and gifted to paralyze yourself.  You are cheating the pride from having a strong powerful leader; you have to go from crawling to walking at some point, so why not stand tall NOW.

Make sure you are signed up on my email list to inspired.